“What Lies Beneath: Western Pennsylvania Forests”

Joaquin Navarro was born in Santander, Spain in 1965.  His first solo exhibition, at 19 years old, was at the Galeria del los Ministerios in Santander.  He also participated in a number of group exhibitions in Spain at various locations.  Navarro studied architecture at the Polytechnic Institute of Santander and film and television at the Complutense University in Madrid.

Navarro moved to Los Angeles in 1992 to study art direction for film and television at UCLA and soon thereafter became a set designer at Warner Bros.  His work as a set designer for television includes such shows as Suddenly Susan, E.R., The O.C., Gilmore Girls, Family Matters, Step by Step, Presidio Med, Pretty Little Liars and many more.

Joaquin Navarro moved to Pittsburgh in 2010 to pursue real estate investment and painting.  After many years of living in Los Angeles, Navarro was struck by the natural beauty of the Western Pennsylvania landscape but wanted to also address the challenges it faced.

This series takes the beauty of Western Pennsylvania forest landscapes and subverts them with an unnatural pallet referencing man’s impact on nature.  Beauty persists in nature as depicted in these paintings but takes on a sinister, if magnetic, quality. 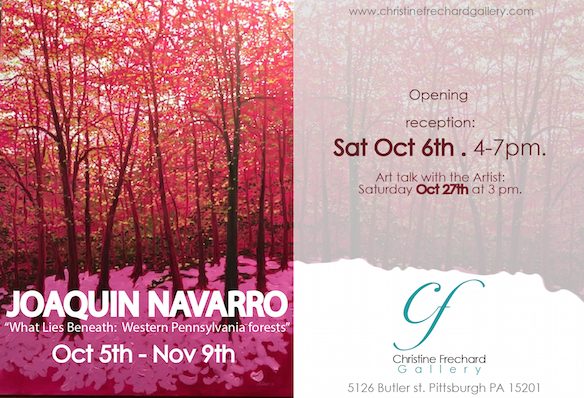