Cartoonist, Sean Knickerbocker will be swooping into town on tour for a Pittsburgh Comics Salon / Copacetic Comics Company Two-In-One Team-Up on Wednesday, June 5 for a reading and signing!

First up, from 6:00 to 8:00pm, he will participate in and make a special presentation at the Salon, held downstairs from Copacetic at Kaibur Coffee, then, following that, things will head upstairs to Copacetic for an hour of celebrating the release of Knickerbocker’s hot-off-the-press graphic novel, Rust Belt.
– – – – – – – – – – – –
ABOUT RUST BELT: Published by Secret Acres, Rust Belt is a comics commentary on the contemporary struggle to survive when the world you grew up in is crumbling into history and whatever is going to replace it is still under construction.
– – – – – – – – – – – –
“Rust Belt is a recording of disappointment, failure and frustration. A depiction of life observed by way of characters that don’t feel created but rather feel as if they palpably breathe and cry. Rust Belt is the genuine article.”
– Chuck Forsman, author of The End of the Fucking World
– – – – – – – – – – – –
Some people aren’t invited to the Resistance. They meet no definition of the Other. Identity politics excludes them. We call them unlucky when they fall victim to economic injustice. We blame their rage for our national crises – but do we know them? Rust Belt looks right at the underemployed, the working poor and the transients of America’s decaying, industrial cities.
– – – – – – – – – – – –
SEAN KNICKERBOCKER:
Sean Knickerbocker is a cartoonist, illustrator, and printer. He graduated from the Center For Cartoon Studies in 2012. His comics have appeared in Ecotone, Irene, and the Nib among other publications. He is a native of West Valley, New York and currently lives in Minneapolis, Minnesota. 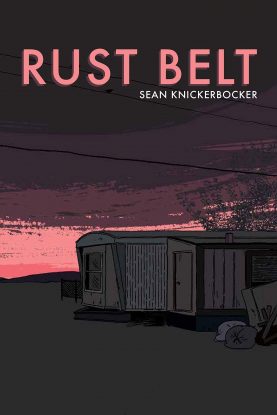 Help Support the Pittsburgh Current and the future of Independent Journalism.