Stewart O’Nan is renowned for illuminating the unexpected grace of everyday life and the resilience of ordinary people with humor, intelligence, and compassion. In Henry, Himself–a prequel to the beloved Emily, Alone-–he offers an unsentimental, moving life story of a twentieth-century everyman.

Soldier, son, lover, husband, breadwinner, churchgoer, Henry Maxwell has spent his whole life trying to live with honor. A native Pittsburgher and engineer, he’s always believed in logic, sacrifice, and hard work. Now, seventy-five and retired, he feels the world has passed him by. It’s 1998, the American century is ending, and nothing is simple anymore. His children are distant, their unhappiness a mystery. Only his wife Emily and dog Rufus stand by him. Once so confident, as Henry’s strength and memory desert him, he weighs his dreams against his regrets and is left with questions he can’t answer: Is he a good man? Has he done right by the people he loves? And with time running out, what, realistically, can he hope for?

Like Emily, Alone, Henry, Himself is a wry, warmhearted portrait of an American original who believes he’s reached a dead end only to discover life is full of surprises.

Stewart O’Nan is the author of sixteen previous novels, including City of Secrets; West of Sunset; The Odds; Emily, Alone; Songs for the Missing; Wish You Were Here; A Prayer for the Dying; and Snow Angels. His novel Last Night at the Lobster was a national bestseller and a finalist for the Los Angeles Times Book Prize. He was born, raised, and lives in Pittsburgh.

Tom Sweterlitsch is the author of the novels The Gone World and Tomorrow and Tomorrow, and has worked as a screenwriter for director Neill Blomkamp’s Oats Studios.  He lives in Pittsburgh with his wife and daughter. 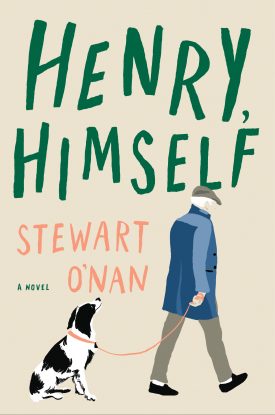