Cynthia enjoyed her childhood of piano lessons and music-making. But as time went on she developed bigger dreams: moving to New York to attend the esteemed Manhattan School of Music. However, this goal was a bit more difficult than she expected. As she struggles with her self-sabotaging demons, shaky memorization andinsufficient technique, she masters a falling piano, a sweltering practice room, a music-hating neighbor, a condescending teacher and other obstacles that confront a young Colorado classical pianist who has decided to tackle the Big Apple!

In this charming, music-filled 60 minute solo show, Cynthia creates over ten characters including her piano teachers: her kindly childhood teacher, her University of Denver teacher who opens up her eyes to the world of New York and her formidable first NY piano teacher. Throughout the show she’ll play the piano music of Bach, Beethoven, Brahms, Chopin, Debussy and Schubert.

The show is touching, funny, honest and very musical.

And then there’s that mysterious New Yorker Magazine…….

About the Performer:
​Born and raised in another steel town, Pueblo, Colorado, Cynthia moved to NY to pursue a career as a classical pianist and attend the Manhattan School of Music.  She soon moved on to musical directing and finally to acting in film and theatre.  Recent film work has been presented at Cannes Festival Corner, The Film Society of Lincoln Center, The Soho International Film Festival, to name a few.  Her episode of the web series, “Brooklyn is in Love” won two awards at the LA Webfest. And she has produced and has a lead role in a new comedic short film, “d’urn it!” Which will be making the festival circuit this year.
​
Stage work includes NY theaters: Theatre Row, The Medicine Show Theatre, The Barrow Group, Gloria Maddox Theatre, The Wild Project, and The Secret Theater.

As a singer she’s sung back-up vocals for both Paul McCartney and Björk.  As a pianist, she’s musical directed over 30 shows, including 15 years with the New York Christmas Revels at Symphony Space, Town Hall and on NPR. www.cynthiashaw.us 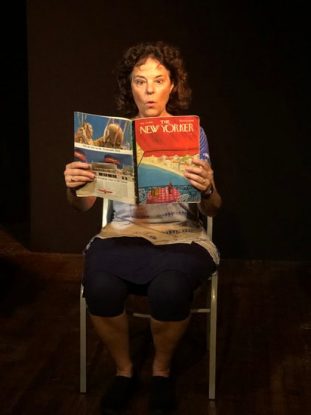